The problem with the certainty–seeking human instinct

Teller, of Penn and Teller fame, gives us a fascinating insight into the human decision–making process, with one of his most famous quotes: “When a magician lets you notice something on your own, his lie becomes impenetrable.”

What is true of the conjuror’s act is also true of life.  When we formulate a conclusion, and believe ourselves to have reached the conclusion through a full data set and flawless reasoning, we become wedded to the resultant belief, and rarely consider allowing a contrary view to penetrate our thinking.

And never in our lifetimes have we had to draw conclusions so quickly about something for which we are so chronically underqualified as the current COVID–19 crisis.

Did the government get its response right?

What does the data really say?

Are female politicians really doing a better job than their male counterparts?

Is the science sound?

Has Bill Gates contrived the whole thing to become a trillionaire?

When a magician lets you notice something on your own, his lie becomes impenetrable.

Unless you are a unicorn comprising a statistician, an expert in big data modelling, a virologist, a public communications specialist and a behavioural psychologist, you don’t have all of the information you need in your head to draw the right answer.  In fact, you are unlikely to have even a tiny percentage of the information you need to draw anything approaching an informed position on any of these issues.

Yet in the newspapers, on websites and on social media channels, every day I read people who have drawn impenetrable conclusions.

The iconic American comedian George Burns summed it up perfectly: “The problem with our country today is that the only people who know how to run it are stuck driving cabs and cutting hair.”

David Dunning and Justin Kruger explored this very issue in their seminal 1999 study Unskilled and unaware of it: How difficulties in recognizing one’s own incompetence lead to inflated self–assessments.  It offers us a sobering conclusion – if you’re incompetent, you can’t know you’re incompetent.  The skills you need to produce a right answer are exactly the skills you need to recognise what a right answer is. 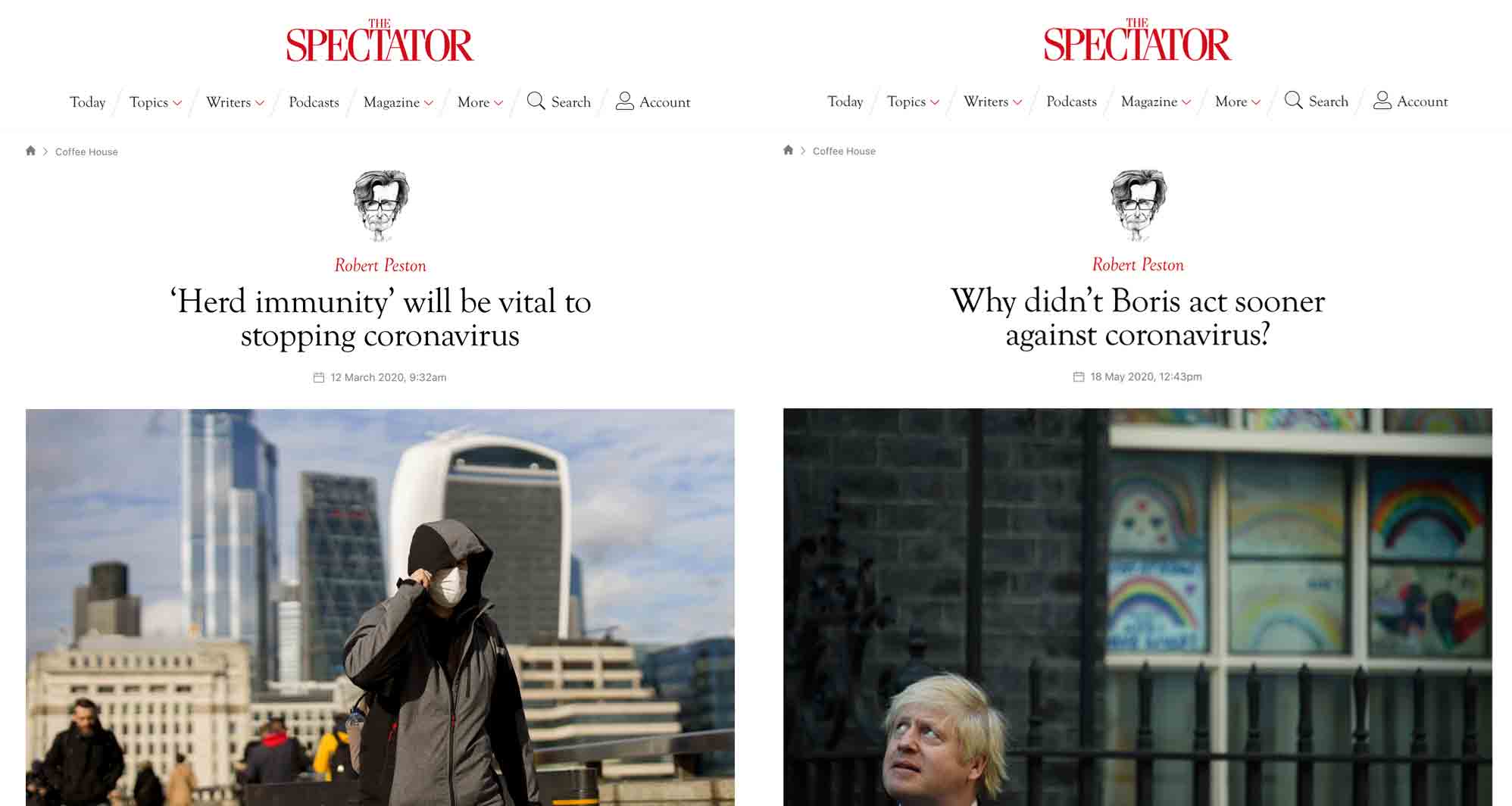 As Robert Peston illustrates above, many media commentators expressed views in February which doubtlessly privately embarrass them based on what we now know in May.  Many more were silent during that month, not whispering a peep about COVID–19, yet simultaneously now criticise leaders for doing the same. It stands to reason than in 12 or 18 months when we may have escaped this, lots of commonly–accepted knowledge today will look quaint and embarrassing when we have a fuller picture.

As the brilliant Stephen Hawking reminded us: “The greatest enemy of knowledge is not ignorance; it is the illusion of knowledge.”

Never in our lifetimes have we had to draw conclusions so quickly about something for which we are so chronically under–qualified as the current COVID–19 crisis.

In defence of the media, many of them have found themselves embroiled in a battle between freedom of speech and public health outcomes.

Should the BBC take an editorial position on conspiracies such as Bill Gates controlling the entire process so he can sell more vaccines, or that the virus came from a laboratory in Wuhan? If they do, they silence the views of some readers.  If they don’t, they promote claims which are so extreme, they require huge amounts of evidence to justify, and which could lead to catastrophic health outcomes if incorrect and widely believed.

It is impossible not to contrast the subtlety, nuance and statistical uncertainty (in the mathematical sense) with which scientists and chief medical officers speak, with the demand for black and white from certain sections of our press.  Notwithstanding the omnishambles that is the UK government’s communications plan (assuming they have one), the media appear unwilling to accept that the world is complex, interconnected and ambiguous.  COVID–19, somewhat inconveniently for its human hosts, isn’t working to a business plan or a lockdown exit schedule.   Our scientific leaders (however flawed or brilliant) don’t have all the answers because they’ve never encountered anything like this in their lives or careers before, the data they are dealing with is incomplete and evidence often contradictory.

Bizarrely, we hanker for the certainty of worst–case scenarios over the uncertainty of the unknown.  We want to take back control of the future, believing the lie that we were ever in control of it in the first place.

Theoretically, in times of crisis the best expression of freedom is to do what you’re told by respected leaders and experts.  In practice however, unless you live in New Zealand, identifying such individuals is proving more difficult than it should be.

Christine’s journey to the world of UX

Ten ways you can avoid sucking at UX

Don’t let metrics get the better of you

I gave you everything you ever wanted; wasn’t what you wanted