The UX of Miss Universe – they’re ALL losers

Unless you’ve been living in a cave since late December you’ll know that American comedian, television host and radio personality Steve Harvey read out the wrong name when announcing the 2015 Miss Universe winner.  While every part of me hoped that Harvey was providing brilliantly cutting social commentary about how interchangeable and meaningless beauty pageant wins are, it turns out that he simply couldn’t understand the card he pulled out of the golden envelope and when you see it for yourself, you’ll understand why.

This leaves the organisers of the event with no fewer than three chronic embarrassments.  Firstly, at the 2015 pageant the host read out the wrong winner.  Secondly, to date every single winner of Miss Universe has been from the same planet (perhaps the competition is organised by the people who brought us World Series baseball) but thirdly – and most inexplicably of all – it’s the early part of the 21st century and the competition still exists.

Heck, if there are any more scandals like this, people might even start to ask questions about the role and credibility of such a facile competition in the modern world.

But back to the card that caused the confusion.

Put yourself in Steve Harvey’s shoes for a moment.  You are about to announce the winner of the Miss Universe 2015 competition from the Planet Hollywood Resort & Casino in Las Vegas.  You are broadcasting live to around six million people.  And you are surrounded by beautiful women.  Someone hands you a card which looks as follows.  Can you work out what it means? 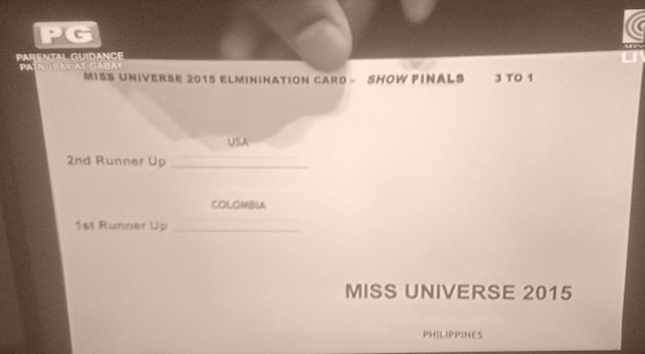 And unfortunately for him, not for big Steve.

In terms of global consequence and import, this fiasco still comes a distant second to the greatest form layout failure of all time.

The greatest form layout failure of all time can without exaggeration claim to have impacted major world events such as 9/11, the Arab Spring and Western interventions in the Middle East.  At the very least it had a major impact on American foreign policy in the first decade of the 21st century. The form in question is the ballot paper from Palm Beach County FL from the 2000 presidential election.

Across the United States, voting was so evenly split between Bush and Gore that it become increasingly clear that the presidential race outcome would come down to a single state.  The winner in Florida would become the next president of the United States.

Palm Beach was a key county in Florida, with Bush and Gore unsurprisingly dominating polling.  Pat Buchanan, a little–known Reform candidate, whose importance will become apparent in a moment, would have expected between 400 and 500 votes, according to his Florida coordinator, Jim McConnell.  On the night Buchanan received 3,407 votes, around 3000 more than was anticipated.

The form was “designed” as outlined below. 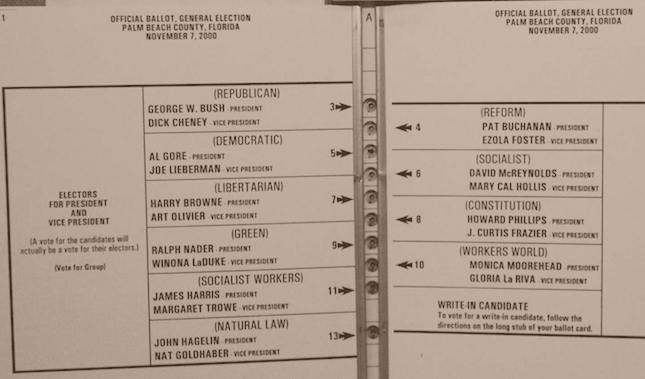 It won’t surprise you to learn that the second tick box was for little known Buchanan.  The format of the form (called a butterfly ballot) had increased Buchanan’s vote by 750% and potentially decreased Gore’s vote by a number that we will never know.  Ultimately the Florida vote was settled in favour of George Bush, by a margin of only 537 votes out of almost 6 million cast.

These apparently random stories about forms are relevant to the Internet because we spend so much of our time on the web filling them in.  Outside of navigation and search, forms represent the single biggest element of web interactivity.  Steve Harvey’s moment of pain illustrates how their design impacts usability and confidence and George Bush’s eight years in the white house reminds us how their design directly impacts quality and accuracy of inputs.

Perhaps a paraphrased Bush deserves the last word on this one?  “Don’t misunderestimate the challenge of doing forms well.”